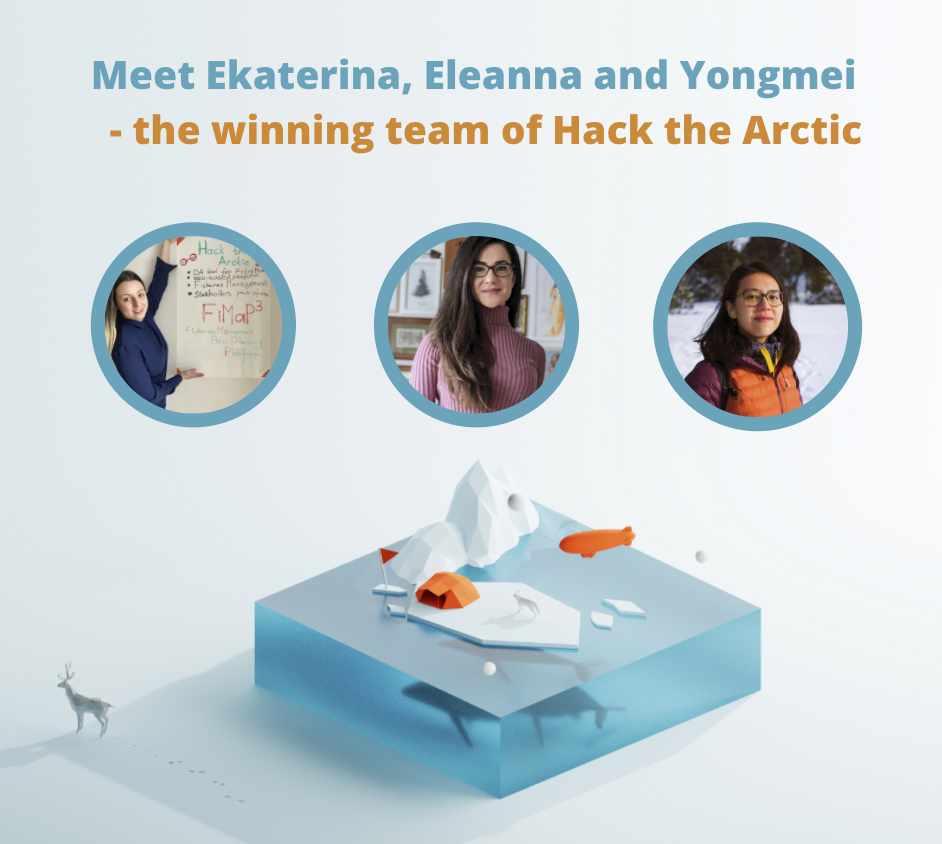 Meet Ekaterina, Eleanna and Yongmei – the winning team of Hack the Arctic

Read the interview with a dynamic female trio who stands behind FiMaP3 – the winning project of Hack the Arctic online hackathon event. Who are they? How did they come up with the Fisheries Management Policy Planning Platform idea, and how could we develop it further?

For those who don’t know, Hack the Arctic was a 48-hr online hackathon open to anyone interested in using Arctic environmental data to develop a service or project. Over 300 people registered for the event and eventually submitted 27 projects responding to 5 different challenges. ENVRI community was one of the main organizers together with ICOS ERIC and INAR. The event summary is available here.

Hello ladies! Could you please tell us a bit about yourself? Who are the people behind the winning team?

Eleanna: The FiMaP3 team is formed by a dynamic female trio, Ekaterina Baibuz, Dr. Yongmei Gong, and myself, Dr. Eleanna Asvestari. I was born and raised in Greece, and I am currently an Academy of Finland Postdoctoral researcher at the University of Helsinki in the field of Space physics. I am passionate about all things science and an active science communicator.

Yongmei: I am originally from China but I have spent ⅓ of my life abroad. I received my Ph.D. degree in Geophysics from Helsinki University. I am currently a postdoc research fellow in the Geography department at NTNU in Norway, where I work on natural hazards and glaciers.

Ekaterina: I am originally from Russia, now living my life in Finland with my partner, a cat, and a dog. I am at the last stage of my Ph.D. in computational materials physics at the University of Helsinki, and I am currently trying to kick off my career in data science. The three of us met at the University of Helsinki through the Science Basement, a science communication project which Ekaterina is currently vice-chairing, Eleanna is a project coordinator and a podcast host, and Yongmei used to publish her own popular science comic and was coordinating science and art projects during her time in Helsinki.

Wow, good to see you are such active scientists and science communicators. Now, tell us how you learn about Hack the Arctic and what made you decide to participate?

Eleanna: When I heard about the event through social media, it sounded like a fun experience and a good opportunity to learn more about a field quite different from my own research field. I am very curious by nature, and hard to say no when something exciting comes along the way.

Yongmei: One of the Hack the Arctic organizers notified me about the event and told me that Eleanna and Ekaterina were participating. So we teamed up.

Ekaterina: I am currently trying to start a data science career, so I often go to hackathons and workshops to expand my DS portfolio. When I heard about a hackathon for analyzing Arctic data, I knew I would participate. It sounded like it would be an amazing opportunity for me to practice my data analysis skills. When the event was announced, I searched for teammates among The Science Basement members, and luckily Eleanna agreed to team up! We were looking for other possible teammates and later found Yongmei, who was planning to participate.

We are delighted you created such an amazing team that delivered a truly impressive project in less than 48 hours. So, can you explain what is FiMaP3 actually about?

Eleanna: The idea behind FiMaP3 is to develop a web-based platform that provides well-analyzed and virtualized physical oceanographic and marine biological data for better data-driven policy and decision-making for the Arctic region.

Yongmei: That is right. And at the same time, the tool can be used by local fishing communities to help them determine potential fishing locations. Taking the idea one step further is to use the platform also as a monitoring system of Arctic climate parameters, marine biodiversity, fishing activities, and deep-sea exploration. From this perspective, the platform can also serve as a reporting and data collection point that will help monitor the activities in the Arctic from a variety of vantage points.

Sounds great! How did you come up with the idea?

Ekaterina: When all three of us joined forces and sat down to discuss which challenge to tackle, Yongmei brought up that there was a vast amount of different kinds of observations taken from the Arctic ocean, and she would like to do something that has more direct societal impact.

Yongmei: Yes, that is true. We later brainstormed about the possible applications of those data. We thought that the fishing community and marine conservationists could benefit from a data visualization tool that would make scientific data more comprehensible to lay-users.

Eleanna: Also, the reduction and redistribution of Arctic sea ice are opening up new territories for resource exploitation. Such a tool should be developed in time to ensure Arctic policies are decided based on scientific data. Coincidentally, my family has a fishing business back in Greece. So we immediately thought this would be a good idea. Then we interviewed my father. He thought the idea was good too!  So everything kickstarted from there.

Yongmei: We started thinking about how to both enable the fishing communities and at the same time protect the environment.

Besides the fisherman communities,  who else could benefit from your solution?

Ekaterina: We think our stakeholders should include anyone with an interest or activities in the Arctic Ocean. Having science communication and contributing to policymaking in mind, we hope it could benefit decision-makers more, such as governmental agencies, non-profit conservation groups, industrial fishing companies, and, as you said, the local fishing communities.  During the hackathon, we interviewed Eleanna’s father, Stavros, who is a fisherman together with his brother and son. We shared our idea with him, and not only we got an affirmation as to how useful such a platform could be to the fishing business, but he also gave us a message that became our motto “In order to keep on having, we need to keep on caring!”.

Indeed. So, how to turn your prototype project into a real tool that could be used by the fishermen like your father and the policy-makers groups you mentioned a moment ago?

Eleanna: We are trying to contact more researchers with different natural sciences and social sciences backgrounds to discuss how to actualize the concept. So far, a non-profit environmental communications center has reached out to us.

Oh, that is amazing! Congratulations and all the best with turning your plan into reality. You told us about the success part of your story. But how about the problems you had to deal with during the hackathon weekend?

Yongmei: The biggest obstacle is that none of us has an academic background in fisheries management nor marine biology. However, we all have a natural sciences background and extensive data analysis experience. We are also aware of the challenges faced by the Arctic region in terms of biodiversity loss, climate change, and geopolitics in general. Then we consulted our mentors, who have given us a lot of advice on what kind of data is important for fisheries management.

Well, you did great regardless of a missing background in marine science. But I guess it took you a lot of effort to put all the knowledge, data, and advice from your mentors together.  So, tell us honestly – how did you actually enjoy the hackathon?

You won the first prize, 1000EUR, and a high-resolution satellite image from any place on Earth provided by ICEYE. Have you already decided on the place where the image will be taken?

Eleanna: Yongmei wants satellite imagery covering a glacier called Tystigbreen in Norway. Her research group is performing field measurements on the glacier and monitoring the glacial outbursts of floods there. She hopes to make use of the radar image for her research.

Ekaterina: I was at first thinking about the location that unites the three of us, and that would be the Kumpula campus of the University of Helsinki, where we all met. But when Yongmei told us that she could actually use a satellite image for her research, our minds got immediately settled because that would be a perfect outcome. Not only we got to work on saving the Arctic topic, but the price we won could also help with research regarding climate change and natural hazards!

Would you participate in the hackathon again? You definitely should!!!

Eleanna: Absolutely! It was exhausting but also exciting!

Yongmei: I found Hackathon very exhausting. I will consider participating depending on the topic. I’d definitely participate in another hackathon like Hack The Arctic, which is relevant to my research background and what I am interested in.

Ekaterina: 100 % yes! I love hackathons in general, and Hack The Arctic so far has been the most enjoyable experience.

Thank you, and all the best with your future endeavors.